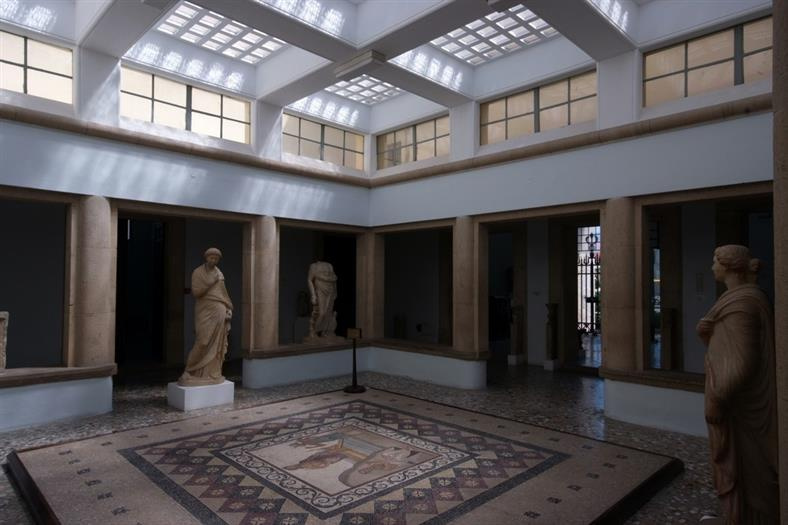 The two storey bulding on Eleftherias Square that houses the Archaeological museum of Kos is a protected monument of the Italian occupation era (1912 - 1943), built in 1935.

It is considered a sample of the international style bequeathed by the Italian occupation to the atrchitectural history of Kos, although some view this as a sample of italian fascist monument architecture.

The museum boasts a rich collection of artifacts from antiquity, up until the late Roman era.

The most important sculptures and mosaics are on display in the ground floor and in the atrium of the museum. The western hall exhibits statues of the hellenistic era, most of which were found stored in the arcades of the Odeon.

Statues of Demetra, Kore and Athena dated from the mid 4th to the mid 3rd centuries B.C. can be found in the Northern hall of the museum. The Eastern hall exhibits statues of the Roman era, including a sitting Hermes and a statue of Demetra.

Finally, one more mosaic of the Hellenistic era from the excavation of the now restored Casa Romana, portraying the bottom of the sea adorns the northern wall of the peristyle.

The creation of the website is co-financed by the European Union (ERDF) and national resources of Greece and Cyprus. The content of the site is the sole responsibility of the name of the beneficiary and can in no way be taken to reflect the decisions of the European Union, the participating countries and the managing authority.